In the past week as well as working on Hugglets mice! (four finished so far) I've also been working on a few commissions too, one for a new shop and the other for a gift for my friend Naomi.

Naomi and I have worked together for a few years, I was her supervisor when she first started work at the day centre and has become a brilliant carer, we are only a few months apart in age therefore have lots in common, anyway Naomi is expecting her first child in October and has only a few weeks left before her maternity leave starts. On Saturday Naomi's sister in law Claire hosted a baby shower and it was lots of fun, I took a small present for the baby (booties and vests as you can never have enough) and I made a bear for Naomi, I think Mum's always get forgotten a bit so wanted Naomi to have something for her, I suspect that the baby will get one too at some point! (shhh that's a secret though) I did'nt name the bear as I thought Naomi would like to do that herself and she's just informed me that she's chosen "Miffy" as that's what her and her partner Ben have been calling her bump. 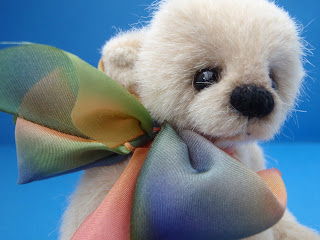