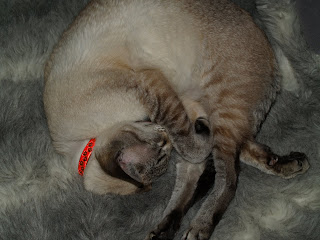 "George on my bed"
This is my seal tabbie point siamese! He looks adorable here, alas like most Siamese he's a pain in the bum! Siamese are more like dogs than normal moggies, he likes company, hates being alone, will follow you around the house, hola at weird times in the night because he's cold and wants to get in your bed, then when you've got up and let him in he changes his mind. He sulks when he doesn't get his own way, makes you put the heating on because he's cold! He eats for England, roast chicken (yes he's spoiled) He likes to come and "help" when I'm bear making usually in the form of wanting to get on my lap just when I'm covered in bear bits or finishing a partially hard nose! Or he goes to sleep in the middle of a pile of mohair or the bed so I can't work (I'd never be able to wake him)
Our other two cats are just normal moggies and they are completely different, Tigger is beautiful, the cleanest cat I've ever known, he's always washing, he doesn't really like people much, he's impossible to do anything with, he'll only let me pick him up or put a coller on him and if he's ill and needs pills its a nightmare! He comes to you if and when he feels like it and sleeps in a cardboard box in the conservatory! A normal cat really but definitely my cat, he dribbles when I stroke him and gets all silly, he doesn't do this with anyone else! I think he's a little mad too. 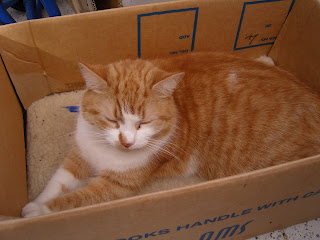 "Tigger in his box!"
And then there's Pepsi (the old boy), christened "The cat with attitude" by our neighbour, he's grumpy, will swip you just for fun then will be rubbing round your legs looking for a fuss the next minute, he rules the house, rules then dogs (they are scared of him) Oh and he's so fat you can bearly pick him up! 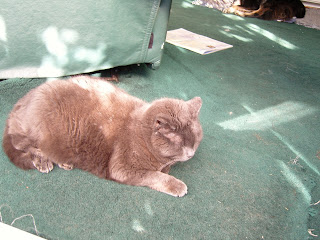 "Pepsi"
I wouldn't be without my cats, I much prefer them to dogs! Even though we've got two of those as well! I'll save talking about them for another day! X
Posted by Elanor Clare Andrews No comments:

What a lovely exhausting day!!!!!

Well I think Huggets was a brilliant success for all on Sunday! I had a wonderful day, it was so busy and there was that show buzz in the air, I was so busy chatting that I didn't get a chance to have a look around for a bear myself which is unheard of as I usually come home with at least one little fellow for me, I didn't even get a chance to look at mohair either :-(

In total I sold 16 of the 18 I took :-) I've never sold so well, so I'm really chuffed and a bit shell shocked, 4 went to Bear Paths in America and 2 went to The Bear Huggery in the Isle of Man and the rest to lovely collectors, I'm a very happy but tired bunny!
http://www.bearpaths.com/

So now there's lots to do, I'm away this weekend visiting my Aunt and I'm going to have to take work with me, I've go to get a Hamleys order done by next Thursday and its the Rochester show on the 9th!!!! Its fingers to the bone again, oh how wonderful.x
Posted by Elanor Clare Andrews No comments: 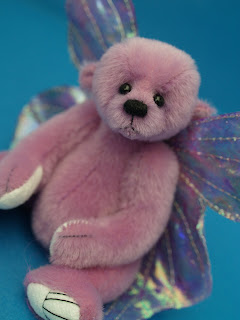 
Well I think I'm ready! 18 bears are finished, bags, leaflets etc done, cash box...check. Mum has 3 boxes of knitting and Kim's go the sat nav, its all systems go. This is the bit I hate though, I never sleep well before the fair, I'm running over and over everything in my head and worrying I'll not sell a thing, silly huh. Oh well a hot chocolate and a good film should hopefully sort me out! Hopefully I'll see you there.x 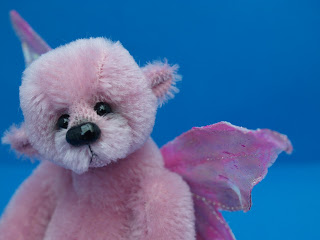 Only 3 more full days to go........ I think I'll be ready, I better get on with some work though :-) x
Posted by Elanor Clare Andrews No comments: 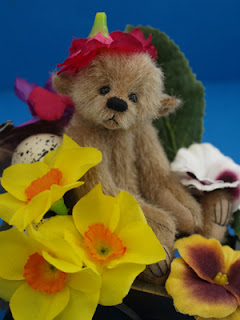 "Easter Parade"
Its taken me all day to photograph and upload my preview page! Its really frustrating I can tell you, but its now done! I'm still working on bears (and mice!) and I'm hoping to have 18 to take to Hugglets on Sunday.
Posted by Elanor Clare Andrews 1 comment:

I've burnt my finger :-( at work getting a bowl out of the microwave, what a wally, its on my right index finger and about an inch long! So I had a bit of a panic I wouldn't be able to sew but its okay, I managed to finish another bear so not as terrible as it could have been!!!!!
Posted by Elanor Clare Andrews No comments:

for a studio!!!!!!! I am so jealous of people who are able to covert one of their spare rooms or have a hut in their garden like some of my "bear" friends do, I have to work out of my bedroom :-( although I do have a space in our spare room I have to share this space with both Mum and Dad so its not so easily accessible at times, all my stuff is all over the house, under beds, in draws everywhere, my Dad's a very keen gardener so having a hut is out of the question too. A few years ago I made this decision to not move out of home and to cut my hours at work to have a real go at "Shantock Bears" although I've never regretted this I do wonder if its a little sad still living at home at 28......needs must though, I could go back to work full time and afford to rent a flat (it still would be very hard as this is an expensive area) but then I'd have no time for the bears so whats the use in that, I'd be miserable, so for the time being I shall dream of the day I can have everything in one place not have to work on a bed and to have a place to call my own :-) 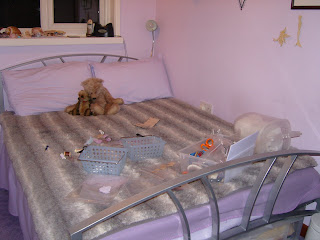 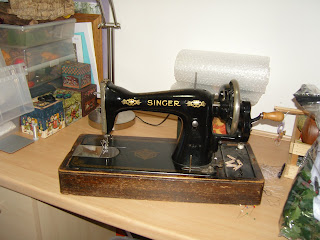 My old singer! In my little space in the spare room!

Only two weeks to go!

Ahhh its come around so quickly I can't believe Hugglets is only two weeks away, this is the point where I go a little mad, worrying I'm not going to have enough stock, worrying the car will break down, worrying I'll sell nothing!!! With so much work to do and not sleeping (because I'm worrying about not sleeping!) I get a tad stressy :-) The thing is it always works out well, even last September when my friend who was driving us slept through her alarm and got to my house an hour late it was fine so really I'm worrying about nothing, trouble is at 4am I'm not so rational ;-)
The sun has been shining today so I've managed to take a few pic's of some of the bears I've finished so far, as yet none of them are named! 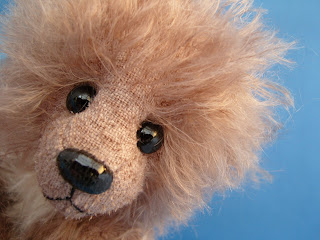 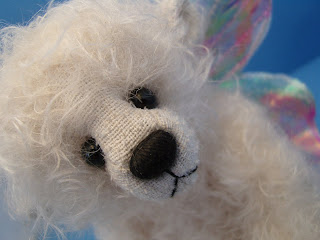 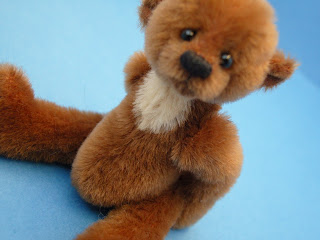 BTW, we came 2nd in the pub quiz :-( but we lost to the NO/YES team who are lovely so it was so bad :-)
Posted by Elanor Clare Andrews No comments:

I'm off to the pub quiz tonight! We've won the last 2 Thursdays in a row so I'm really hoping we can make it a hat-trick this week! I never thought a few years ago I'd have so much fun at a pub quiz :-) I'm not the most competitive person really, but the others in my group are EXTREMELY competitive and I think this is rubbing off on me! I started getting very paranoid about people lip reading last week and we only won by 4 points so this week I'm going to be policing everything we say! Heads down everybody ;-) x
Posted by Elanor Clare Andrews No comments:

I have had my life touch by cancer many times, my Grandmother fought it for two years and lost her battle with it, my Aunt had the early onset of breast cancer, thankfully it was caught and is now ok, a work colleague sadly didnt make it, I lost a school friend many years ago, a close family friend has fought it twice and won! Oh I could go on, anyway today I decided to enter the Race for Life for all the people I love, but especially for my Granny, a day never goes by that I don't miss her and know she'll right by my side while I walk it (no not run! maybe next year!)

My local event is in St Albans and I'm now trying to rope a few of my friends in to raise much needed cash for Cancer Research if you'd like to know more about events in your area check out this link http://www.raceforlife.org/

On a different note! The light hasn't been great this weekend, so I haven't managed to photograph any of the Hugglets bears for a sneaky peek! Fingers crossed for a good day on Friday and I'll hopefully post some pic's at the weekend. X
Posted by Elanor Clare Andrews No comments:

Its really not been a great week, I was really sick yesterday, I think I had some kinda food poisoning and could'nt keep anything down. Luckly I'm feeling better today but I'm really behind with work now so am busy sewing and stuffing today!!!

I thought I'd give a sneaky preview of a few of the Hugglets bears I've been working on over the next few days so here's the 1st litle chap! 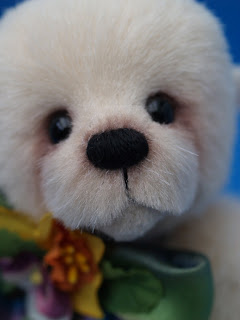 As yet he has no name!